The Psychology of Mālama ʻĀina

The land is a chief, people are its servants.

My students and former students know (or should know) that mālama ʻāina is more than merely “care for the land.” It is that, but ʻāina, for one thing, is not “land,” but arable land. I was corrected by Walter Ritte at the ʻĀina Forum – he said ʻāina is not land. I’d say ʻāina is not real estate. It is not the sand of the beaches – we distinguish ʻone hānau (the sands of one’s birth) from ʻāina hānau (the land of one’s birth). To some, it is specifically the deep, fertile lands of the loʻi kalo. 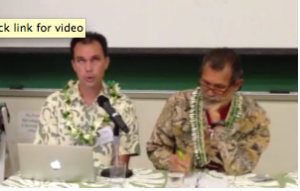 Walter Ritte and myself at the ʻĀina Forum. click here for video

How do chiefs practice mālama ʻāina when they don’t usually work the land personally? (There are exceptions, mainly among the lower-ranking chiefs). Mālama ʻāina for chiefs is the maintenance of the reciprocal relationship with the makaʻāinana (those ma  ka ʻāina – on the land). Chiefs care for the makaʻāinana, providing administration that ensures enough food for all under their rule, while makaʻāinana provide labor. Those chiefs who did not fulfill this kuleana – maintaining pono – were summarily killed or exiled.

The standard ethic today in social relations is also one of reciprocity. We provide taxes and expect government services in return. But part of the difficulty of the ethic of mālama ʻāina today, is that we are asked to think about those with whom there is no direct reciprocal relationship: the unborn. This requires a different kind of consciousness, one in which maximizing one’s own self-interest (the capitalist assumption) is replaced by thought of others – those who may want to share a resource, or are not alive yet to ask. This requires a degree of trust that those others will also not exploit the resource. And yet solutions are being found to this “tragedy of the commons” – the situation in which commonly-held, unowned resources are bound to be exploited. And these solutions so not require trust, but cooperative action. Elinor Ostrom shows in Governing the Commons: The Evolution of Institutions for Collective Action (1990) that, contrary to popular sentiment, commons are governable. Indeed, the Hawaiian kapu system did precisely this.

The West has only recently woken up to this kind of thinking. The environmental movement is usually dated to Rachael Carson’s 1962 book Silent Spring, in which we are asked to imagine a spring without the sounds of birds and bees. Today bee colonies are widely known to be collapsing, and 75% of Hawaiʻi’s bird species are either extinct or endangered.

The environmental crisis is coming to be recognized not as a problem of resources or their distribution, but of consciousness. In Leonardo DiCaprio’s film The 11th Hour, one of the commentators says “inside, outside,” – what we think on the inside projects out and creates the world we experience. If our minds are toxic, so is our world.

Deborah Winter and Susan Koger’s The Psychology of Environmental Problems (2004) looks at these issues from the various fields within psychology; Freudian, Social, Behavioral, Physiological, Cognitive and Holistic psychologies. They find problems from each of these perspectives. People “use denial to reduce fear and anxiety, perhaps even more so as the risks are closer.” The local effects of environmental issues are “not readily noticeable, so rewards and costs are not directly experienced.” Our nervous systems “are not wired to pick up small effects [even on our own health] over a long period of time, [and] the long delay between exposure and health outcomes reduces our ability to notice the physiological impacts at a local level.” Finally, we miscalculate the risks of death from rare and common causes, making us “less likely to pay attention to local [environmental] risks that are at play everyday” (Winter and Koger, 230). But most importantly they also point out very obvious fact that few want to acknowledge, that “Western civilization is unsustainable” Winter and Koger, xiv):

Living in Europe, Deborah immensely enjoyed many pinnacles of human civilization: the music, the art, the ballet, the cathedrals, the cuisine, and the ambiance of urban sophistication. But as glorious and magnificent as human civilization is, Western civilization is not sustainable. In Germany and northern Europe, it is easier to see the ugly ramifications of too many people and too much pollution, where trees in the Black forest are dying from automobile pollution from the autobahn, no wilderness exists anymore, and an entire river can die. In the United States, unsustainable patterns are less obvious because there is more space per person. But we are not far behind our European friends.

An entirely new – green – civilization is implicated by this stark observation, which means new ways of thinking and forms of education. My view of the role of Hawaiian educators is that we are perpetually trying to make our students, who are immersed in the most narcissistic culture ever devised, understand the concept of kākou, that we’re all in this together. On the other hand, they have much more environmental consciousness than the generation that is now in power. So there’s hope. But this raising of consciousness is a central task as my generation takes over and prepares to hand power to the next. “Consciousness raising” may sound like an abstract term, but there are discrete ways of working on this that transcend anything that’s currently done in our (mostly secular) school systems. I’ve written and spoken elsewhere of these methods, which have implications larger even than the environment.