Why I am a Leftist

I wrote recently on how Hawaiian sovereignty transcends left and right. But I did not mean to suggest Iʻm ambivalent about where I stand on that spectrum.

I always knew I was a “liberal” – my first political memory is the election of Jimmy Carter (probably the most Left President of them all), and of being very happy about it. I was 5. But as I got older, “liberal” became a bad word for me, not because of the reasons Bill OʻReilly might think so, but for the opposite reason; liberals are not Left enough. My political development was somewhat slowed by attending Whittier College, alma mater of Richard Nixon. But in Massachusetts I came into my own as a card-carrying Leftist. I cut my teeth at Political Research Associates, a think tank that monitored the Right wing, and where wearing oneʻs politics on oneʻs sleeve was a badge of honor. I sat a couple of feet from the great researcher Chip Berlet and by understanding the psychology of the Right, came to understand that of the Left. 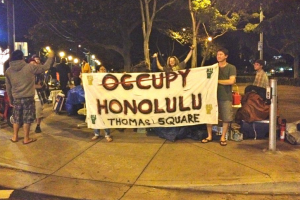 The understanding that emerged for me was that while liberals believe that problems arise from repairable flaws in “the system” and a lack of access to it, Progressives (or Leftists) felt that the systems needed to be fundamentally redesigned. Some held a Marxist bent, but many did not. Issue by issue I came to understand the internal logic of the Left position: pro-choice, pro-immigrant rights, pro-gay rights, etc.; in short, pro-democracy.

But in lieu of a very well-orchstrated alternative plan, the Right steamrolled us throughout the 80s and 90s and well into the “naughts” (early 2000s). Part of the problem is the Left’s distrust of charismatic leadership, and their belief in bottom-up organizing. While the Left sought “leaderless” movements and wrote endless editorials in publications like The Progressive, the Right organized down to the local level, taking on the most mundane policy issues. I co-wrote a report on one such initiative, the Pioneer Institute in Massachusetts, which worked on conservative state-level policy issues of privatization, and virtually controlled education policy in ways far outstripping its size and budget.

But pendulums always swing back, and this happened with Obama and the Occupy movement, where leaderless revolution seemed to almost spontaneously emerge. There seems to be a progressive ground swell, with even fairly mainstream media like Salon and the Huffington Post making progressive arguments and even cogently showing their practicality (something the left wasnʻt quite so good at previously).

They say “if youʻre not liberal when youʻre young, you donʻt have a heart and if youʻre not conservative when youʻre old, you donʻt have a brain.” And I have to admit the left has lost me on a couple of issues. Iʻve been a bit amazed to see the resistance against wind energy (though I can understand the arguments, I donʻt see a good alternative), and if the Left comes out against solar, I might turn in my card. Surely, there needs to be balance, but despite the above reservations, the Left has shown itself to be much more often on the “right” side of history.

One response to “Why I am a Leftist”